Fricke und Mallah Microwave Technology GmbH is the first point of contact for the development of new innovative methods. This is also recognized in scientific research.

Our experienced physicists and high frequency engineers are absolute experts in their field, confirmed in numerous industrial and scientific research projects.

We are currently participating in scientific projects from the following areas:

SULFREE - Microwave pyrolysis for the recycling of used tyres

EU-funded researchers have developed an end-to-end process for used car tyres to turn them into valuable products that can be used in the tyre industry rather than just recycled. 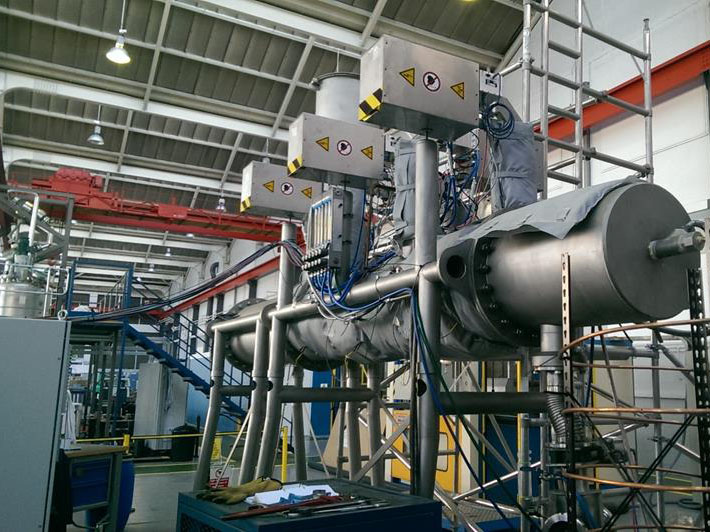 With the growing number of vehicles, the disposal of used tyres is a growing problem. They are also often disposed of illegally or dumped in landfills, which poses a serious environmental problem. But the technology for recovering high quality materials from scrap tyres is evolving. 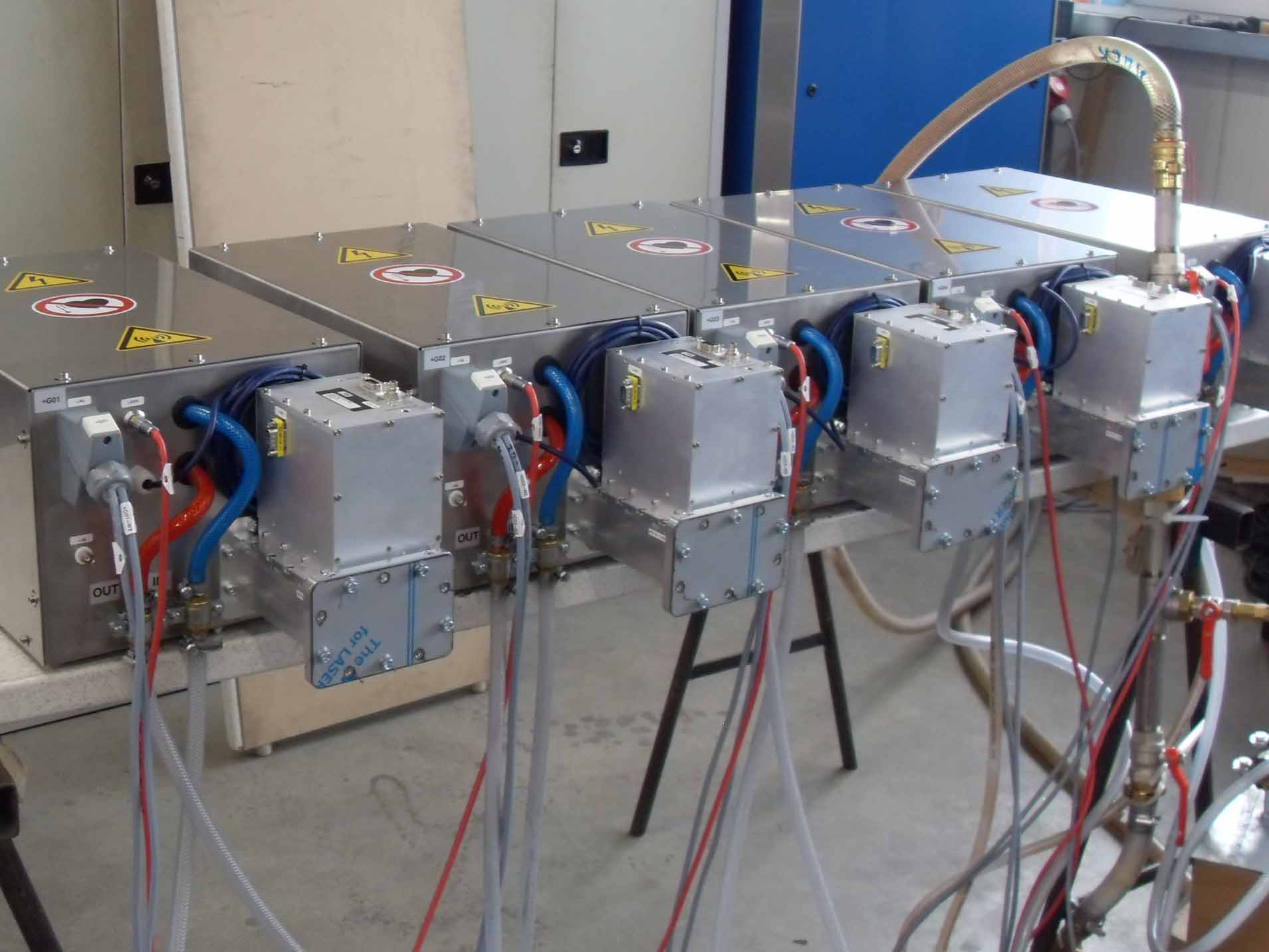 The process starts with a microwave pyrolysis. Since no used tire recycling microwave pyrolysis plants have been in operation until now, this was a great success. For this process Fricke and Mallah supplied 5 microwave generators with 3 kW / 2450 Mhz each. Via the innovative internal mixing system with discs and bars the waste rubber is intensively mixed to achieve complete pyrolysis.

Carbon black and hot gas, the products of the pyrolysis process, each have a high sulphur content. The carbon black is activated by steam to increase its market value. The hot steam is cooled, compressed and injected under pressure into a fixed bed reactor to produce ultra-low sulphur oil and gas as well as sulphur.

A condenser system, which produces condensed high-sulfur oil instead of steam, significantly reduces the cost of the process. The shell-and-tube heat exchanger of the condenser facilitates heat and steam recovery to meet the energy needs of the system and to activate the carbon black.

Scientists demonstrated the cost-effectiveness of the system. The recovery rates were comparable to those of existing programs (more than 90%). The important difference, however, is the resulting high-quality products: Pyrolysis oil, sulphur-impregnated activated carbon, elemental sulphur and combustion gases.

SULFREE is of great economic and environmental benefit, as the promotion of tyre recycling minimises the illegal disposal of used tyres.

More on the subject: https://cordis.europa.eu/project/id/605246/reporting

CLEAN-HEAT was a 24-month project funded by the European Commission’s H2020 framework programme within the SME instrument phase 2 funding scheme.

The CLEAN-HEAT consortium consisted of the lead SME, Fricke and Mallah Microwave Technology GmbH (FM) partnering with another SME, Microwave Technology (MTL). These SME partners were supported by a number of third parties including Pera Technology Solutions Ltd and London Metropolitan University (LMU).

Magnetrons are the most widely used microwave technology today for both industrial and domestic microwaves. But these systems can only achieve efficiencies of around 45 to 50%, pose safety risks as the use high voltages (5kV) and the magnetrons have a short lifespan requiring frequent replacement. Magnetron technology does not allow for the automatic adjustment of power level to match the load variations. These limitations have a huge cost to industrial microwave processes and there are calls for more efficient solutions. Across Europe, microwaves consume over 9.6 TWh of electrical energy annually.

FM wanted to upscale its 200W solid-state continuous wave microwave system to address these limitations. The 1kW Gallium Nitride (GaN) based microwave system was expected to save at least 25% on electricity consumption, operate at more than 70% efficiency, allow automatic adjustment of power level in response to load variations and significantly reduce equipment size. Also of importance was increased lifespan to eliminate the need for frequent and costly replacements. With all these excellent features and performance advantages, our product needed to be cost competitive with magnetron based microwave sources.

Solid-state microwave technology has many applications including moisture meters, medical RF-Surgery, and domestic and industrial heat processing. It also offers opportunity for automatic power matching that enhances energy efficiency and faster processing speeds than conventional magnetron systems. Full adoption of our technology in both domestic and industrial microwave ovens would lead to potential energy savings of 6.74TWh of electrical power across Europe.

EOL thin-film PV modules have been installed in Germany on an ever-increasing scale in recent years. Depending on the different support measures, this boom has already reached most EU member states and led to an increase in installed PV capacity. According to the expectations of the Association of PV Manufacturers (Solar Power Europe), this development will continue in the coming years and reach other economic regions of the world [SOLA-15]. 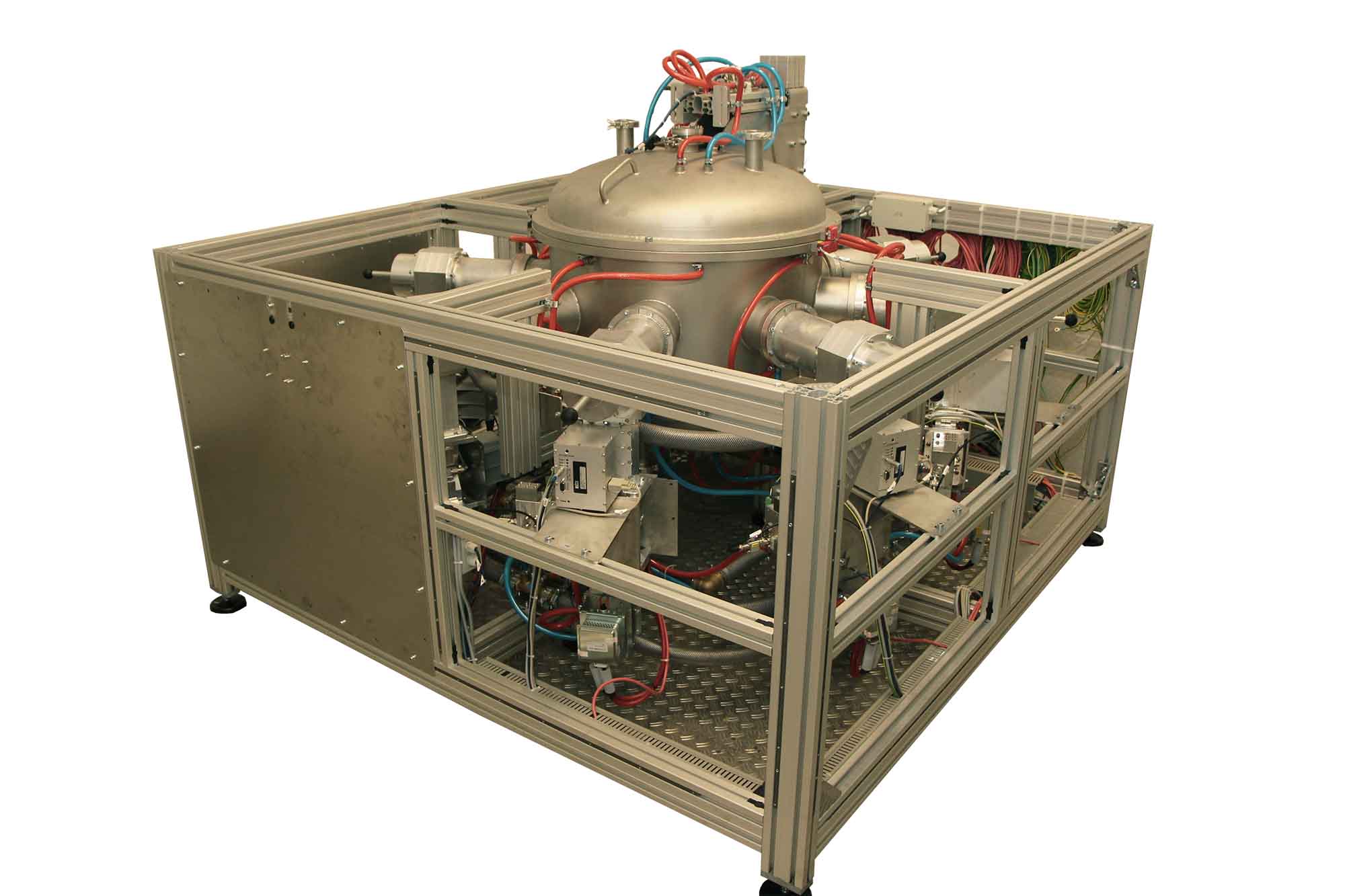 EOL thin-film PV modules consist of light-absorbing semiconductors, which are applied to a glass substrate by chemical bath or vapor phase deposition. In this process, the active metal and semiconductor layers are bonded between two glass plates to form a strong, durable composite. This compact and complex structure directly illustrates the technical challenges that a recycling process for EOL thin-film PV modules faces.

In combination with the expected growth rates, the aspect of module disposal is also coming into focus. There is a lack of market-relevant disposal capacities for silicon wafer-based or EOL thin-film PV modules. EOL thin-film PV modules have so far simply been added to the material flow of the waste glass in diluted doses. The valuable metals are finally lost dissipatively.

The mobilisation of these significant quantities of valuable and increasingly in demand metals for recycling is to be seen as a future challenge for material-flow-specific take-back solutions and recycling technologies in the light of "urban mining". However, the complex structure of EOL thin-film PV modules makes it difficult to separate them into fractions that can be fed into conventional recycling routes.

Due to its innovative process approach, the "PhotoRec" process provides highest selectivity with low process complexity and can thus make a substantial contribution to securing the raw material supply of the solar industry. The long-term goal is to achieve a yield of 90% of semiconductor metals.

The proposed process thus combines a high resource efficiency with optimized energy efficiency and high productivity potential and, with a high degree of innovation, shows for the first time a solution path how strategic metals can be recovered economically from complex composites even in low concentrations. 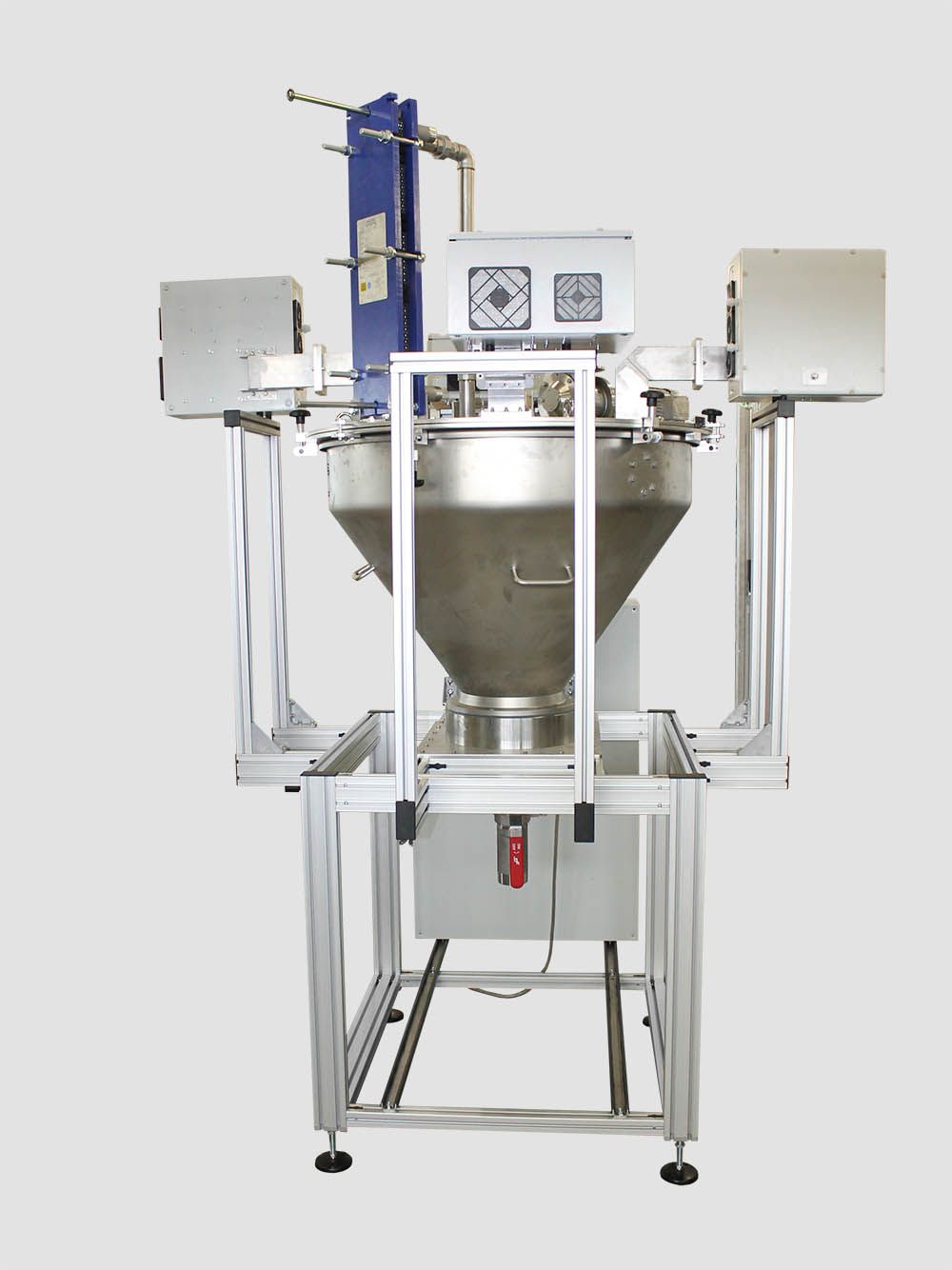 Solutions for effective and sustainable faecal sludge management (FSM) present a significant global need. Tremendous amounts of faecal sludge are produced on a daily basis globally from onsite sanitation; 2.7 billion people worldwide are served by onsite sanitation technologies, and that number is expected to grow to 5 billion by 2030. FSM presents a global challenge.

A new technological concept for excreta (faeces and urine) sterilization and dehydration has been developed by UNESCO-IHE in cooperation with Fricke und Mallah Microwave Technology GmbH and supported by the Bill & Melinda Gates Foundation. The technology makes use of microwave generators that make up part of a specially designed reactor that can convert pathogenic human waste into clean water and inert dry material. The concept has been successfully tested in the Netherlands and Kenya and a demonstration unit is currently under construction.

Electronics is still one of the most dynamic sectors of the economy. Innovative electronic products can be found in almost all areas of life. These include communication, automotive, energy and medicine. New areas of application, combined with increasingly complex stresses and strains, are leading to a considerable growth rate in the field of power electronics and to ever higher demands on the quality and reliability of electronic assemblies. 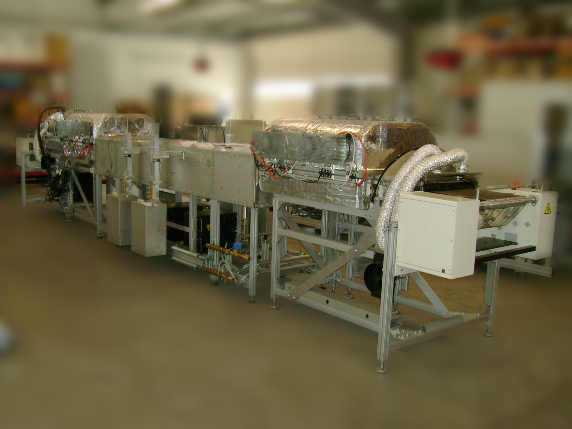 As a result of e-mobility and hybrid technology in the passenger car sector, the demands are also increasing, especially with regard to electrical dielectric strength. An increase in the operating voltage up to 800 V and the extensive use of power electronics modules has a considerable impact on PCB technology. New temperature-stable base materials and copper inner layers up to a thickness of 400 µm are necessary. This also has an impact on the insulating materials used, such as thick-film fillers, solder resist and protective lacquers (conformal coatings), since high-frequency voltage components reduce the service life of insulating systems. Other operating stresses overlap with the stress from electrical voltages to form a complex stress collective.

UV radiation and IR radiation are preferably used for curing and cross-linking of coating materials or lacquers on the printed circuit board. For thermal curing, drying systems in which infrared radiation and circulating air are combined are used. The lacquer is dried from the inside to the outside. The higher the coating thickness, the greater the probability of cracks forming in the coating. At higher film thicknesses, complete drying of the paint is no longer possible and solvent residues remain, which can evaporate in subsequent processes. The application and curing of the coating must therefore be carried out in several steps. The recommended maximum dry film thickness is in the range of 100 µm. Further disadvantages are the long curing times, the high temperature gradients and the thermal load of the assemblies.

During UV curing, an uneven distribution of the radiation energy can lead to tension in the coatings, since the different areas are cured to different degrees. Due to the shadow effect on populated PCBs, cross-linking in shadow areas (e.g. under components) does not occur. The shrinkage of the polymers causes an internal stress gradient to build up, so that stress-free and uniform curing is not possible in thick layers.

In order to achieve a stress-free and homogeneous curing of very thick layers, the coating process, i.e. application of the material and subsequent curing, must be carried out in several steps, which results in longer process times and additional costs. It would therefore be of great advantage to find a process that enables a fast and homogeneous curing of resin systems, even with layer thicknesses of up to 400 µm and higher. 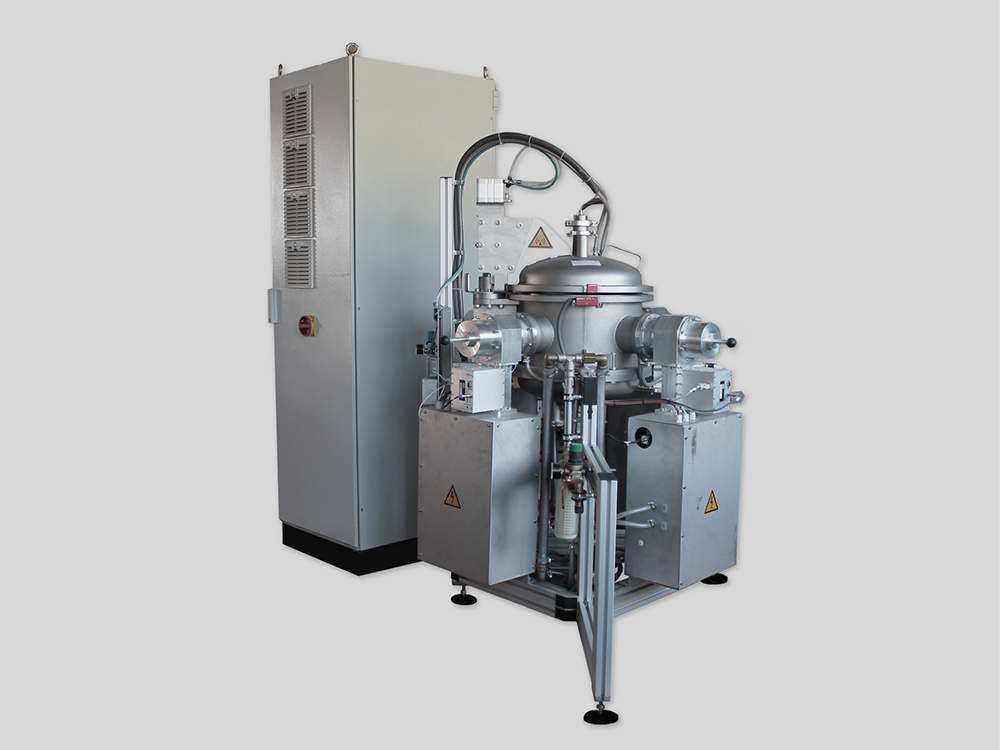 Esprit – Expand the versatility of Self Reinforced Plastics (SRP)

Early trials of selective heating by means of susceptor additives have shown strong promise and a variety of options are available for development. The aim is to have SRP systems for existing moulding technology and for new specialist moulding technology in order to maximize the commercial potential for these new materials. Trials have already resulted in fibre-reinforced samples from standard injection moulding equipment. The initial results show a highly attractive combination of high modulus, high strain at break, high impact resistance and low notch sensitivity.

Self Reinforced Plastics (SRP's) are now maturing into materials suitable for commercial exploitation in applications requiring lightweight, stiff and impact resistant mouldings, as well as possessing excellent recyclability, They are comprised of a thermoplastic fibre and matrix in a similar manner to conventional composites but with the added benefit that the fibre and matrix are derived from a common polymer. This has the advantage that the materials have a much higher stiffness and strength, while having the same low density as unfilled polymers. Self Reinforced Polypropylene (SRPP) is a commercial reality and has begun to make in-roads into certain market sectors such as automotive, personal protective equipment, ballistics panels and other impact sensitive areas.

The ESPRIT project, funded by the EC FP7 program, started in 2008 and is a three-and-a-half-year project which aims to take SRP technology to a new level by modifying the fibre and matrix and by radically improving the processing methods. The aim is to develop production-ready technology utilizing advanced selective melting processes, allowing the materials to be flow-moulded without affecting the reinforcing fibre properties. The materials to be used are Polypropylene (PP), Polyethylene terephthalate (PET), Nylon (PA) and Polyethylene (PE) as well as other more unusual thermoplastics. Material usage and component weight is expected to be reduced by 30% for equivalent stiffness over conventional materials, resulting in energy saving in both manufacture and in use through, for example, lighter vehicles.

The Esprit project has carried out an extensive program of locating, manufacturing and characterizing the base materials from which the flowing Self Reinforced Plastics will be made. These are variations on Self Reinforced Polyolefins (srPO), Self Reinforced Nylons (srPA) and Self Reinforced Polyesters (srPet) and significant improvements in mechanical properties, especially modulus and impact strength, have already been achieved, exceeding the expectations of the project.